According to the tradition, all oriental martial arts come from the same place: the monastery of “the young forest” (Shaolin) close to Loyang (north of China). No matter if this is just a legend or (partly) true, the Shaolin style is one of the oldest.

The Shaolin style is characterised by energetic and powerful movements. Efficiency is prioritised over the artistic aspect. Defensive stances are compact, without any opening for potential hits, and the attacks are explosive.

The Shaolin temple is a Buddhist monastery located in the Henan province, around 600 km south from Beijing . At the beginning of the 6th century an Indian monk, Bodhidharma, came to live there and found the monks from the monastery in a very bad shape, both physically and mentally. He decided to change this with exercises that he codified. That’s how the Shaolin Kung-Fu was born. Bodhidharma also founded the Chan, a Buddhist school (that would become the Zen in Japan ). The legend of the Shaolin boxing lasted through the centuries surrounded by mysteries, tragedies, and high feats.

Today the temple is an important tourist attraction in China . Martial arts are still taught there but the diffusion of its art is mainly done by the numerous private schools surrounding it. The quality of the teaching is relatively average compared to many other locations in China … but one pays for the “Fun” of being trained close to the famous monastery and afterall it’s often the most important thing for the majority of people. 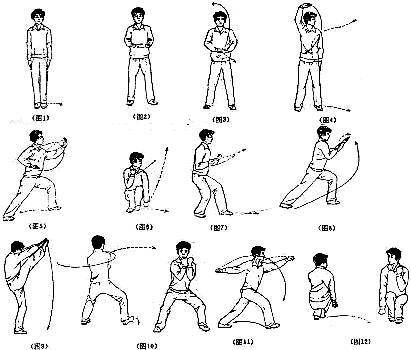 First steps of the most popular Taolu to start with in Shaolin Quan : Xiao Hong Quan
(The small red hand)